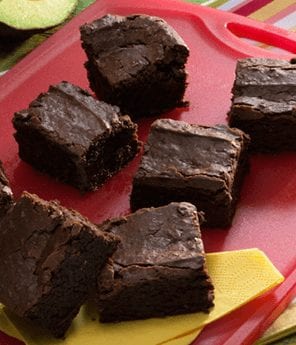 Brownies are described as square or rectangular chocolate baked treats. These dark chocolate avocado brownies are so much more than that! Rich chocolate flavors pair well with creamy avocados in this delicious dessert that you won’t be able to put down.

Ensure that your avocados are mashed until they’re smooth and creamy before adding them to your batter.

Question: How long do brownies last?

Brownies will last 3 to 4 days in an airtight container at room temperature. We recommend storing your brownies in the fridge, as they will safely keep up to 7 days at a cooler temperature. According to the USDA’s Food Saftey and Inspection Service, the temperature in a refrigerator should be 40 °F for safe food storage.

How to tell if brownies are done?

How do you store brownies?

We recommend storing brownies in an airtight container. To keep them fresh, pop them in the fridge for up to seven days.

The exact origins of brownies are debated. Many believe that brownies trace back to 20th century Boston. It’s thought that a woman named Fanny Farmer was the first to create a recipe for brownies. She added this recipe to her cookbook titled “Boston Cooking-School Cookbook” in 1896. Others believe that brownies trace back to Chicago in 1893, and were invented by Bertha Palmer at the Palmer House Hotel in Chicago.

How long can brownies sit out?

We recommend storing brownies in an airtight container for up to 3 to 4 days. They last longer when kept in the fridge. In the fridge, they can last up to 7 days.